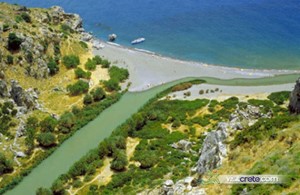 Crete, the place where the Minoan culture was born and evolved. The land where Xenios Zeus was born. Crossroad of seaways and cultures. From here passed Arabs, Venetians, and Turks. With a key role, on the 2nd World War, with the battle of Crete changing the course of the war and hence the history of the world. The island of Domenico Theotokopoulos “El Greco”, Nikos Kazantzakis and Eleftherios Venizelos. With extent 8331 Sq.Km, a length approx. 260 km from the east to west and width from 12 to 60 km Crete is included in the five larger islands of the Mediterranean.

Its geophysical form creates contradictory representations, as it includes forests, seas, and immense beautiful beaches, mountains with high altitude and snow, but also rocky and dry soil. With a rich history, culture, unique natural environment, particularly soft climate and the worldwide known hospitality of its residents constitutes a pole of attraction for a lot of visitors.  The prefectures of Chania, Rethimnon, Heraklion, and Lasithi compose the Region Crete that is surrounded from the north by the Cretan sea, from the south by Liviko sea. 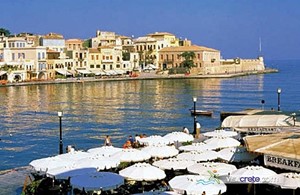 The prefecture is found in the western part of the island, with an extent of 2376 sq. Km. 1.476 of them, are mountainous regions. With a lot of natural beauties, beaches, mountains, forests, caverns, gorges, olive groves, Orange fields that compose a unique environment. A lot of traditional villages, Churches, monasteries, and castles in the hinterland of the prefecture. The tourist infrastructure is very big and capable to correspond the high requirements of tourists from Greece and Europe.  The prefecture is divided into 5 provinces, Apokoronas, Kissamos, Kydonia, Selino, and Sfakia. Vamos, Georgioupoli, Kissamos, Falasarna, Elafonisi, Palaiochora, Kandanos, Loutro, Chora Sfakion, Therisos, Omalos with the wild beautiful national park of the Samaria gorge and finally the capitol of the prefecture beautiful Chania are only some of the parts that someone could visit. Unique monasteries as the ones of Agias Triadas Tzagkarolon, Gouvernetou, Chrysoskalitissas. There are quite a few archaeological sites in the prefecture. Aptera, Falasarna, Polyrrinia, Lissos but also the ancient Chania (Kydonia) are only some of the important monuments of ancient Chania’s culture, that are rescued up to these days. Find out more >> 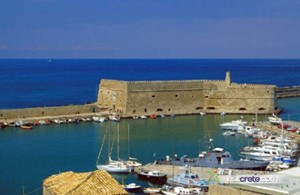 Largest in extent (2641 Sq.Km.) but also in population, prefecture of Crete, constituted from seven provinces: Viannou, Kenouriou, Maleviziou, Monofatsiou, Pediados, Pyrgiotissis, and Temenous. A typical Cretan environment with mountains, beaches, down the country, and caverns. Part of mountain Psiloritis (2456 m.), as well as part of mountain Dikti (2148 m.) at the borders with Lasithi, the mountain Giouchtas, and Asterousia. The plain of Mesara dominates in the south-western part of the prefecture, one of the largest and out of very few plains in Crete that characterize geophysical the prefecture. In this prefecture, someone can visit the unique palace of Knossos, the archaeological site of Gortynas,  Phaestos,  Agias Triadas, and  Malia.  There are also a lot of monasteries of unique beauty and historical importance as those of Odigitria, Apezana, Koudouma, Kalyviani, Vrontisi, Valsamonero, Paliani, Savvathiana, Epanosifis, Agarathos, Arvi, and Kera. So the parts near that sea as well as the mountainous parts of the prefecture were constantly inhabited since the prehistoric years up to these days.  Most known cities and villages are considered Tympaki, Matala, Mires, Archanes, Arkalochori, Agia Pelagia, Chersonissos, Stalis, Malia, and the capital of prefecture cosmopolitan Heraklion. Find out more >> 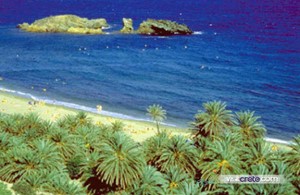 The Eastern prefecture of the island, with an extent of 1818 Sq.km separated into four provinces: Ierapetras, Lasithi, Merambellou, and Sitia. The classic Cretan landscape also here as well as in the remainder of prefectures. Mountains (Dikti, Orno), Gorges (Trypiti), Plateau of Lasithi, and unique beaches that unfold in the bigger part of the southernly prefecture. The visitor can admire the Monasteries of Toplou, Kapsa, Agios Georgios Selinaris, the antiquities of Zakros, Lato, Cavern Psychro, Itanos. The exotic palm forest of Vai, mountain Dikti (the highest of the prefecture), the famous islet of Spinaloga with the Venitian castle that was built in 1579 b.c. and the island of  Koufonisi with the antiquities of  Lefki. There are many characteristic beautiful places of this prefecture as, the Lasithi Plateau, Sitia, Palaikastro, Ierapetra, Ziros, Neapoli, Milatos with the historical cavern, Kritsa, and the capital Agios Nikolaos which with Eloynda constitutes the most important tourist resorts of Lasithi. Find out more >> 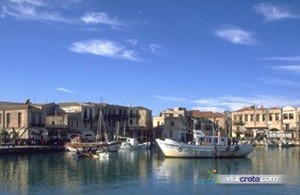 The prefecture of Rethymnon is found between those of Chania and Heraklion. It is the most mountainous prefecture of Crete. Out of 1.496 sq. Km. the 510 is agricultural ground, the 933 pasture lands, the 36 is only covered by settlements, and the 17 Sq.km they are covered by Mediterranean forests of oak, pine, and sfendamos. The water of the sea is crystal clear, while on the southern side of the prefecture the beaches are amazing and the content in salt is high. Most beaches of the prefecture are awarded blue flags from the European Union, proof of cleanness, and the way that they are organized. It is constituted by four provinces. Agios Vasilios, Amari, Mylopotamos, and  Rethymnon.  Its most powerful geophysicist point is the mountain of Psiloritis, which is also the highest mountain in Crete. However, it has other natural beauties also, such as beaches, gorges, and caverns. The most famous places are: Agia Galini, Plakias, Preveli Monastery, Spili, Arkadi monastery, Panormo, the caverns of Zoniana and Melidoni, Anogeia, and its capital, Rethymnon. The biggest archaeological sites which a visitor can see are those of hysterominoan cemetery Armenoi, Eleytherna, Monastiraki.  Find out more >>

Greece in 2nd place globally on Blue Flag beach for 2018

Greece in 2nd place globally on Blue Flag beach for 2018

Our apologies as this service is not available yet. We're doing major changes to offer you more and better services.

Meantime, you can always pop us an e-mail with your inquiry. We would be more than happy to assist you!

We use cookies to ensure that we give you the best experience on our website. If you continue to use this site we will assume that you are happy with it.OkNoPrivacy policy
You can revoke your consent any time using the Revoke consent button.Revoke consent